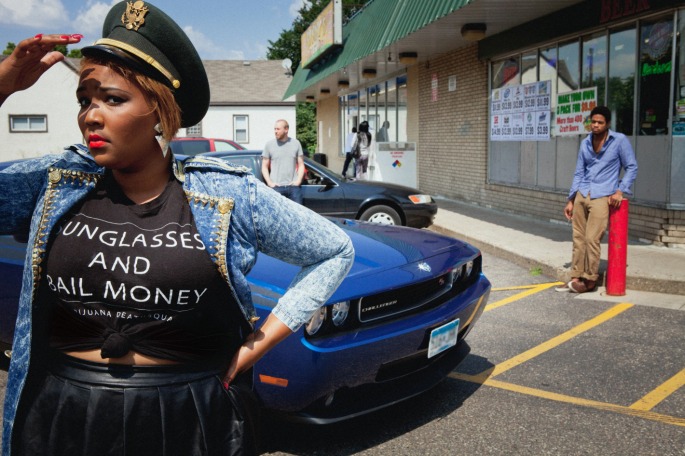 For most listeners, the first encounter with Minneapolis rapper Lizzo was in her outrageous donut-wielding video for 2013 hit ‘Batches and Cookies’.

A whistling, stomping tune with a breathlessly acrobatic flow, it was hard to ignore even without all the dudes getting their torsos buttered in the clip. The album it was taken from, Lizzobangers, was quickly snapped up by Virgin EMI for re-release.

But the legacy of Lizzo began way before she began shouting about cookies from the back of a motorcycle. Raised in Texas surrounded by gospel, she spent the majority of her early musical career in girl groups, having been raised on a solid musical diet of Destiny’s Child (“in fifth grade, I skipped school to see them sing,” she says. “Everyone thought they knew them, they were like ‘I know Matthew Knowles! I know Tina!’”). More recently, you might have hear her slick r’n’b stylings with locally famous trio The Chalice, or GRRRL PRTY, an all-female hip hop crew she’s still performing with now. In her time, though, she’s also fronted an electronic pop duo and progressive rock band, and graduated from the University of Houston with a degree in classical flute.

Lizzobangers came out last year on Totally Gross National Product, a Minneapolis label, but started getting wider global attention when UK audiences leapt on the weirdness of ‘Batches and Cookies’. “Indie music gets lost in America,” reckons Lizzo. “So when you’re an indie artist, and you have like two thousand followers on Twitter, and you’re just playing a bunch of local shows, someone in New York isn’t going to know about you. When I came to the UK, all we had to do was give the album to one person, you know, the proverbial ‘one person’, but that person tells that person…and you look up and you’re playing BBC Radio, and people love you and Twitter verifies you.” The British seem to like what she does, she adds, “maybe because it’s throwback and everyone in America is all on the trap trend right now.” As she says on banger ‘Wat U Mean’, “now I’m making crowds make noise and stuff/ And all the people back home like, ‘who knew?'”.

The album is a rapid-fire blend of aggressive flow and digressive song structures, with a good measure of r’n’b thrown in, and a sense of defiance burning at its centre. “I’ve realised none of these songs make sense. They just kind of come out at you,” she says – but I sense that she’s being flippant, because the tangents she flies off on when I ask for explanations for various tracks and lyrics suggest an intensely personal songwriter. Across these songs, she reflects on her childhood obsessions, tight friendships and the strength she’s had to draw on to propel herself to success in a cookie-cutter industry. 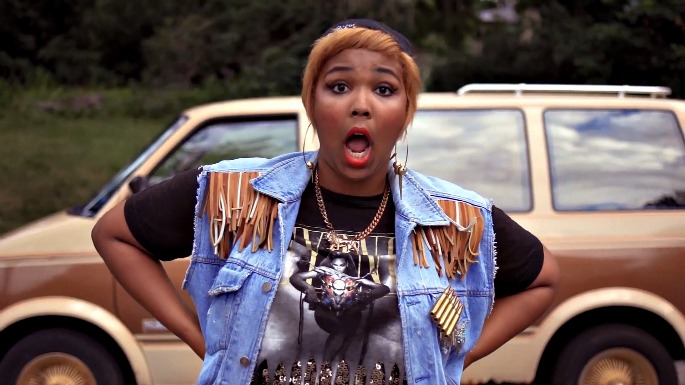 When talking about opener ‘Lizzie Borden’, for example, Lizzo relates how she, being a “huge nerd” as a kid, “would just read encyclopaedias…I would become obsessed with historical events like the Titanic sinking, or the Wild West, or the Renaissance era.” Lizzie Borden, for those who haven’t had their heads in the history books, was a woman who was tried for the axe murder of her parents in Massachusetts in 1892. Like any other morbidly curious 12-or-so year old, Lizzo just had to look up the pictures of Borden’s bludgeoned parents. “It was kind of burned in my brain, it was horrible. So later, when Lazerbeak played this beat for me, I was like ‘oh my god, this beat’s amazing, I’mma murder this beat, I’m gonna kill it, like Lizzie Borden.'”

What really characterises the album, though, is the directness with which it throws the gauntlet down to the music industry itself. Music in 2014 is arguably more progressive than ever, but problems of class, race and gender discrimination loom large. Why are there so many white, male, upper-middle class men able to climb their way to the top? Because they can afford to, and because their counterparts are the ones in charge; throughout the album, Lizzo documents her struggles with numerous glass ceilings and unrealistic expectations that had her living on ramen as she tried to get her break. Take the defiant body confidence in her ever-present slogan “big girl small world”, and the way lyrics like “I can’t be a black star without your black card” (on ‘T-Baby’) and “You, yeah you/ I’m talking to the middle man/ Like how you’re content with giving someone else the upper hand” (on ‘Be Still’) talk directly to a personified industry standard.

“There’s this frustration,” she says. “I’m not a sexy artist. I don’t look like Nicki Minaj – she’s fine. I don’t look like Iggy Azalea, Lil Kim, I don’t look like them. They’re really hot, and really talented too. It’s easier to get in the mainstream when you have this look, this marketable brand about you. What I love about Missy Elliott is that she did it without that, you know, she was just talented and just worked her way to the top. I didn’t get a chance a lot, I had to prove myself through talent.”

Back in Houston, she tells me, producers would invite “sexy girls” to their studios all the time. “I would tag along because all my friends were sexy…and I would learn and absorb. I had to be good. Not saying that anyone who’s sexy right now who’s poppin’ isn’t good, because that’s just like the cherry on top. Everyone who’s at the top is at the top because they worked their butts off, their fine butts! But I had to deal with that adversity.”

Once, she might not have talked about this in her music; “I’ve always been in groups where I had to like, spit a 16 real quick.­ I could never really talk about anything, because then it would be Sophia’s turn, or Manchita’s turn, and I couldn’t elaborate.” But with Lizzobangers? “I did it. I got it out.”

In the groups, she was the one writing the songs and assigning the parts, “but I was just too afraid to sing them myself. Lizzo as a solo artist has only existed since November last year. So it’s still scary. Sometimes I’m still like, ‘okay, let’s cut the song short!’ – because it’s so much, you know? I’m letting people have so much of me.” But as Virgin EMI prepare to release her debut, the time for sharing the spotlight is over. “Confidence is very important, and that’s why it took so long for me: I had to get my confidence up,” she says. “Somewhere along the line, you break out. You have to become comfortable with yourself and love yourself.”