Yamaha Reface: Everything you need to know

Just as Roland has with AIRA and Korg did with the Volca line, Yamaha has looked to its past to develop a line of affordable synths for the contemporary market.

As such, Yamaha Reface is a mixture of old and new that not everyone will be happy with, both from an aesthetic and technical standpoint. Much like Korg and Roland’s equivalent products, they’re best looked at on their own terms rather than in relation to 40-year-old hardware. They might not seem particularly groundbreaking on first glance, but Yamaha’s Reface line holds a few surprises that aren’t in the hardware.

The official launch event yesterday more or less confirmed what we originally knew, and first impressions weren’t great if you’re a producer of electronic music. While AIRA and the Volca range are clearly geared up for making dance music, Yamaha chose to use a keyboard player and vocalist to highlight the Reface line’s expressive capabilities in a songwriting context. A promotional video at the start also chose to highlight a touring songwriter rather than an EDM producer, which is telling about the money it’s going after.

Despite this, the launch event left a lot to be positive about – especially for electronic producers who want an affordable synth. There’s no doubt that Yamaha has made Reface to get into the growing market for affordable synths, but it’s also used the opportunity to innovate. 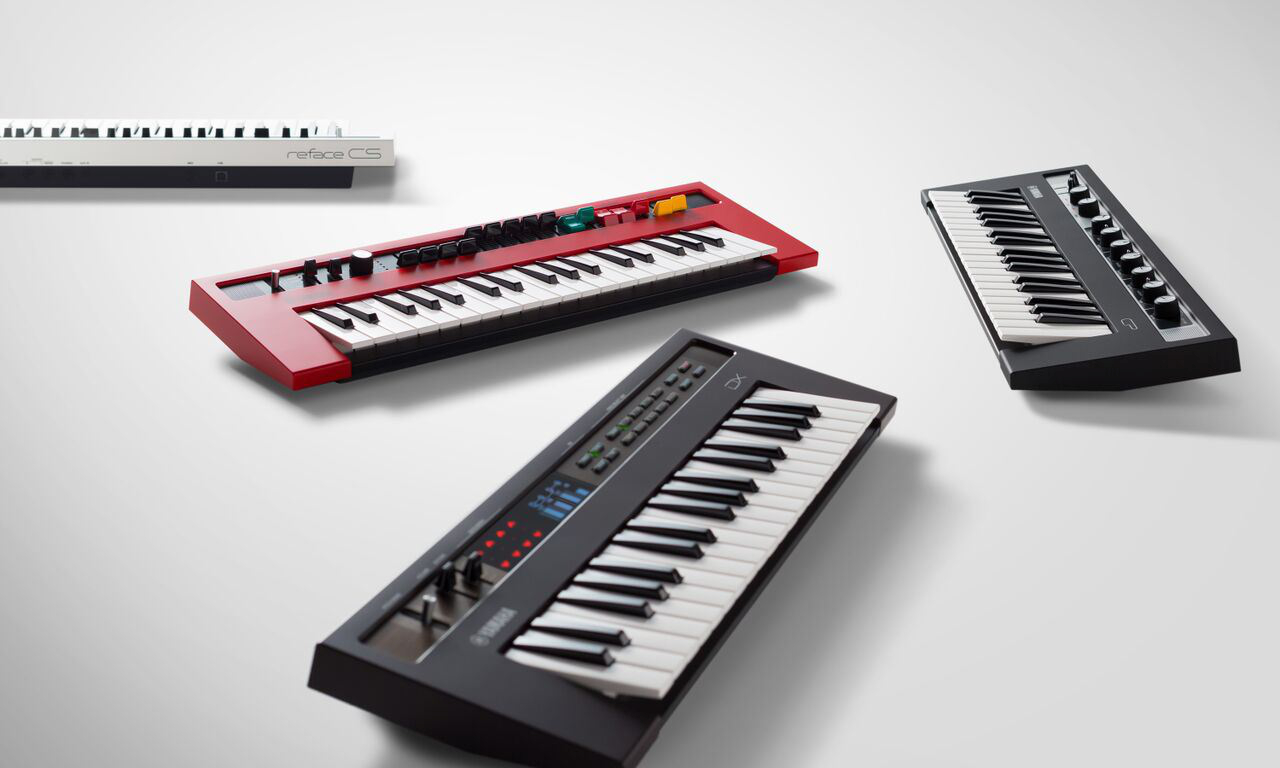 Yamaha purists probably aren’t going to like the look of the four Reface keyboards. For a start, they come with built-in speakers, something you’d expect from a cheap Casio. The compact form factor and mini keys also offer less control than you’d get with a soft synth and a fully-featured MIDI controller.

However, like Teenage Engineering’s OP-1 they look intuitive and fun to use, and despite outward appearances there’s enough connections to keep most producers happy. DC power, MIDI, USB, audio output and auxiliary input are all included, meaning that if you don’t like the keyboard, you can plug in one of your choice (as it is though, Yamaha promises the keys are “high quality”). There’s also a handy phrase looper with overdubbing capabilities – something that makes it potentially more than just a novelty.

Like the AIRA and Volca lines, Yamaha has prioritised physical control. There’s certainly not as many sliders as most people would like – especially in comparison to the AIRA System-1, which is probably the Reface line’s closest rival – but having less might make using it less confusing for beginners.

Despite these misgivings, they sound pretty good from the demonstrations. The CS and DX synths offer eight-voice polyphony, which is more than the AIRA System-1’s four voices, and the CS offers a mix of digital and virtual analog sources, making it capable of sounds you wouldn’t get with a standard analog synth. Yamaha will be charging around £350 for each Reface – it’s hard to get a similar depth of sound in a hardware synth for that money, let alone a keyboard and physical controls as well.

Most producers will be considering the DX and CS keyboards for their more synthetic palettes, but the organic sounds of the YC organ and CP piano could be worth a look too. The recent affordable gear from Roland and Korg has focused on the synthetic, and it’s refreshing to see attention placed on these vintage sounds – something producers of deep house and hip-hop will probably appreciate.

The Reface DX is perhaps the biggest disappointment on paper. The glassy, digital sound of the original DX7 has gained itself a cult following, so the chance to own a new version without the user interface problems that blighted the original would have been welcome. Instead, the DX is equipped with a touch pad that looks tricky to use.

The DX sound engine also only features four sine wave operators instead of the DX7’s eight – meaning it might not be quite as capable of the lush pads of the original. The tradeoff is that feedback can be applied to all four sine wave operators instead of the DX7’s one. The key word Yamaha’s representatives used when describing the Reface DX was “aggression,” which suggests it’s aiming the DX more at an EDM audience than the kind of artists who want to recreate Brian Eno-style chords. With second-hand DX7s costing less than the Reface DX, it might be better just to buy a DX7 from Ebay if you want the classic FM sound.

So much music production gear now has an accompanying iOS app, it’s unusual if you don’t have one. Reface is no different, but Yamaha’s Capture app looks like the kind of thing you’ll be using regularly rather than stick in a folder and forget about.

It lets you use your phone as preset library, making the YC, CP and CS models much more practical in a live setting. The DX has its own patch memory, but it looks like Capture – which lets you organise presets into setlists – will be the more user-friendly option.

The lack of menu screens or memory in Korg’s updated MS-20 might be more authentic, but Yamaha has come up with a solution that shows vintage layouts can be practical too. It makes these keyboards the kind of thing you could easily perform with on stage as well as use in a studio.

Soundmondo is Yamaha’s biggest surprise. It’s a section of the Yamaha Synth website that uses Google Chrome’s new Web MIDI feature, meaning you can plug any Reface keyboard into your computer via USB and the site will recognise it instantly. Once you’re plugged into Soundmondo, you’ll be able to use a browser interface to create your own presets and load them up to the Capture app.

The best part of Soundmondo is a sync feature that helps you correct the difference between the position of the controls in your browser and the position on your controller. By highlighting in green the way the knobs need to be turned in you browser, Yamaha has solved the longstanding disconnect between hardware and software and made it easier for novices to actively learn how to create their own sounds – just like the patch guides you used to get with early synths.

Yamaha’s adoption of Web MIDI is both an elegant and groundbreaking solution. Even if the synths themselves are a failure, expect to see versions of Yamaha’s online patch creator appearing alongside its rivals’ instruments before too long. 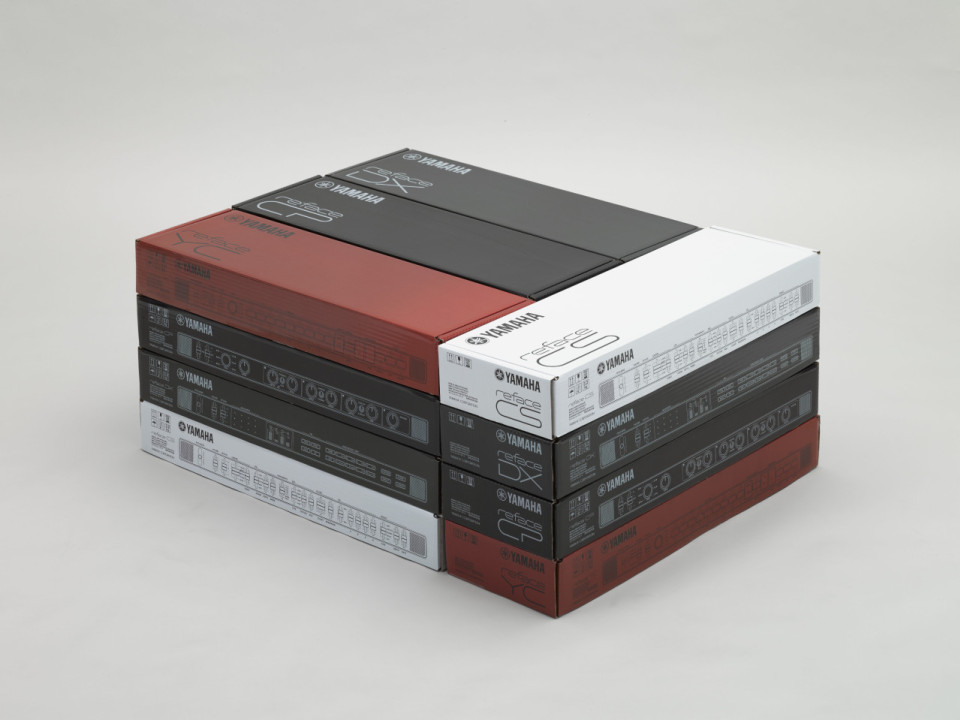 There’s already a DAW that let you collaborate on tracks online, so it makes sense that a company like Yamaha would create a dedicated social sharing platform for one of its instruments.

As well as being a place to create patches, Soundmondo is a social network of sorts where you can create a profile and upload YouTube and SoundCloud embeds. It’s unlikely artists will be leaving Facebook for Soundmondo anytime soon, but it does offer a place where musicians can trade synth patches for their Reface keyboards. You’ll even be able to create QR codes using the Capture app to send synth patches instantly via your mobile.

Musicians are generally quite dedicated to their gear, so the decision to create an online community for Reface that isn’t part of an alienating forum is genuinely quite exciting. It might be asking too much that Yamaha will be able to maintain a community based on a mutual appreciation and respect that isn’t interrupted by synth trolls, but it’s a step in the right direction.

Working out how to use new gear is difficult, and creating a network like this could be just the thing novices need to help them. It’s not just Roland and Korg that will take notice of Soundmondo, but SoundCloud and Facebook too. Yamaha might have arrived to the affordable synth market late, but Reface’s social and sharing features show it’s leading in other ways.