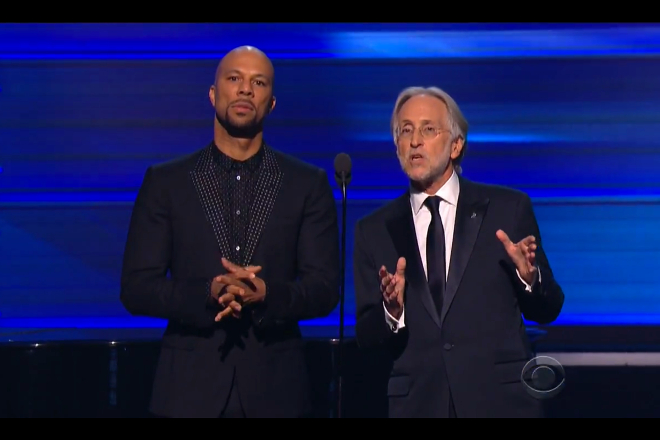 “Isn’t a song worth more than a penny?”

Common took to the stage at last night’s Grammy Awards alongside Recording Academy president Neil Portnow to make a stand against the free tiers offered on streaming services like Spotify.

“When you stream a song, all the people that created that music receive a fraction of a penny,” Portnow said on stage after a performance by 12-year-old pianist Joey Alexander. “Isn’t a song worth more than a penny?

“Listen, we all love the convenience, and we support technologies like streaming, which connect us to that music. But we also have to make sure that artists grow up in a world where music is a viable career.”

Portnow, who is part of an industry pressure group called the Creators Alliance that formed last year to lobby Washington for fair pay for artists, was accompanied by rapper Common, who thanked fans who pay for music rather than take the ad-supported route.

“So tonight, my comrades of the recording academy would like to thank our fans who support our work by going to a concert, subscribing to a music service, collecting vinyl, or speaking out for artists’ rights,” Common said.

It marks the second time Portnow has highlighted the issue of free music streaming at the Grammys. Last year he was joined on stage by Jennifer Hudson, where he said: “What if we’re all watching the Grammys a few years from now and there’s no Best New Artist award because there aren’t enough talented artists and songwriters who are actually able to make a living from their craft?”

The amount artists get paid from music streaming continues to be a contentious issue: last year it was reported that Spotify was considering allowing some artists to release albums only to paid subscribers.

Jay Z’s Tidal service, which launched in March 2015 claims to offer higher royalty rates than Spotify, but has struggled to gain market share from its rivals.