Watch N.W.A. perform together for the first time in 27 years at Coachella 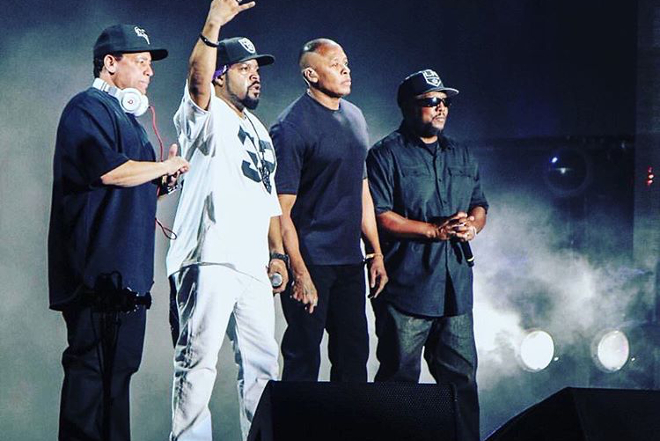 The four surviving members of N.W.A. performed on stage together for the first time in 27 years at Coachella this weekend, as Dr. Dre, MC Ren and DJ Yella joined Ice Cube’s set on April 23.

Ice Cube also brought Kendrick Lamar out on stage for a performance of his 2015 track ‘Alright’ and dedicated the set to Prince, who died last week at the age of 57.

Elsewhere at Coachella, LCD Soundsystem paid tribute to the late artist with a cover of his track ‘Controversy’.

The N.W.A. reunion comes a few weeks after the hip-hop act were inducted into the Rock and Roll Hall of Fame by Lamar, who spoke at length about the Compton act’s legacy.

The group declined to perform at the ceremony, despite renewed interest in their career following the success of last year’s N.W.A. biopic, Straight Outta Compton.

N.W.A.’s inclusion attracted criticism from Kiss frontman Gene Simmons, who implied that the trio shouldn’t have been added to the Rock and Roll Hall of Fame because they are a hip-hop act. [via CoS]