London’s Illuminations festival has added more names to its fifth anniversary line-up, with The Field and Gazelle Twin joining Pantha Du Prince for a series of shows that offer innovative, at times immersive, performances from the disciplines of art, music and film.

The Museum of London will also open its doors for late night gathering ‘The Museum of Lost Sounds’. This is a free event that circles the periphery of music, sound, art and film. It will feature contributions from musicians including Forest Swords – whose piece focuses on six compositions gleaned from sounds of the human body – and work from conceptual artists like Yuri Suzuki and Sarah Angliss.

They join previously-announced headliner The Bug, who will be accompanied by special guests for a show called ‘Sirens’, which blurs the boundaries between live performance and immersive installation. Taking place at east London’s Autumn Street Studios, ‘Sirens’ is centred around the complications surrounding the birth of his son.

The multi-venue festival takes place from October 28 – November 11. Full details of the festival can be found at the Illuminations website, with tickets also available.

Read next: “I dream of patching”: The Field on the modular synth obsessions that drive The Follower 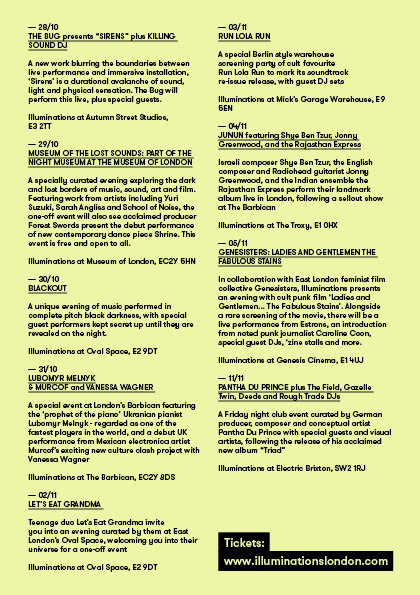