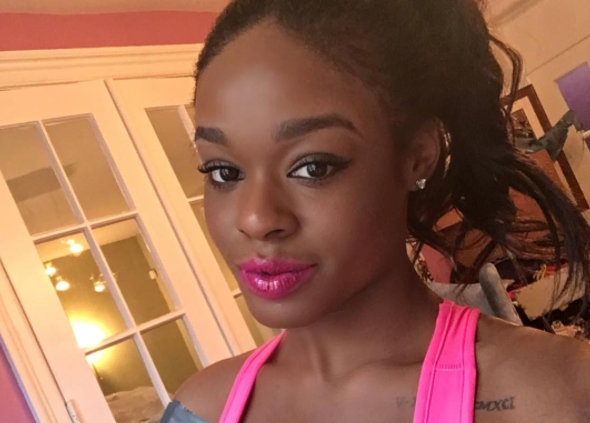 Banks responds to the Wu-Tang rapper’s angry statement about her alleged altercation with the Gladiator actor.

Earlier this week, Azealia Banks filed a battery report alleging that Gladiator actor Russell Crowe choked and spat on her and used racial slurs at a party in Beverly Hills where she was a guest of RZA.

Yesterday, the the Wu-Tang rapper released a statement in which he called Banks’ behaviour “loud and obnoxious” and claimed that she had been “insulting half the room” at the event. He says that he felt “a little embarrassed” because she was his guest, while also refuting Banks’ previous claim that she had signed a deal with RZA’s label.

Today, Banks has responded to RZA with her own Facebook post, in which she says “RZA has clearly been given no legal advice,” and accuses him of trying to “gaslight” her, a tactic of psychological abuse, by going straight to TMZ with his story.

“Whatever pieces are left of his brain after years and years of smoking dust stupidly allowed him to ramble himself into incriminating his friend, and completely debunking their entire made up theory,” she writes, before adding: “You mean to tell me, that a 300lb man needed to use all of that force, to remove an “erratic” guest from a party?”

Banks also uses the statement to point out that she had spent a number of hours at the hotel party, from 9.45pm – 2.45am, as both her Uber records and hotel surveillance footage shows. “If I were supposedly erratic, how did I possibly end up spending that much time at your party.”

She signs off the post with: “If I were this supposed party monster, how the fuck did Russell find time to tweet a link to my song?” 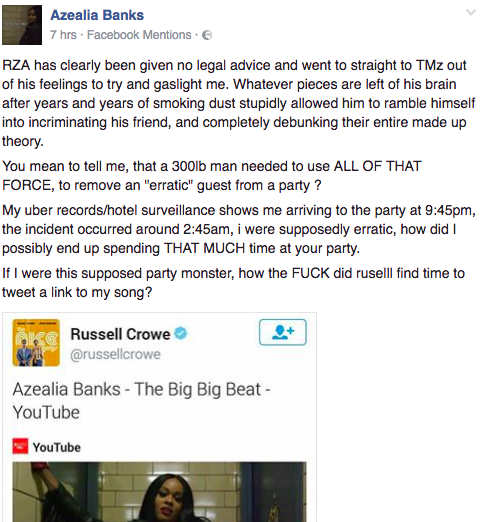