German royalty collection agency GEMA has finally reached a deal with YouTube that will unblock thousands of music videos for viewers in Germany.

According to a statement from GEMA, the 70,000 rights-holders represented by the agency will now receive payment for music streamed on YouTube, and the Google-owned company will remove the “unfortunately, this is not available in Germany” message, which had become familiar to music fans during the lengthy standoff.

YouTube’s Christophe Muller said: “We are extremely pleased to have reached an agreement with GEMA to help their members earn revenue and to enable new musical talents to emerge.

“YouTube has evolved into an important source of promotion and revenue for musicians and we are pleased that GEMA members will benefit from their creative work on YouTube.”

The dispute began in 2009 when GEMA and YouTube were unable to reach agreement on a fee-per-stream for music videos, with GEMA – a private, for-profit organisation – attempting to raise the fee to €0.01 per stream.

In 2010, GEMA sued YouTube for distributing copyrighted material without permission. In 2012, a German court held that YouTube must install software to prevent users from uploading GEMA content. In January of this year GEMA unsuccessfully sued YouTube for €1.6 million in damages.

GEMA also made headlines in 2012 when it threatened clubs with an increase in royalty fees which it was feared would threaten the survival of many German nightclubs. An agreement was reached in 2013 with a smaller fee increase.

In 2014, Berlin’s Prince Charles nightclub installed a track fingerprinting system intended to provide GEMA with a more accurate picture of what DJs are playing. [via RA] 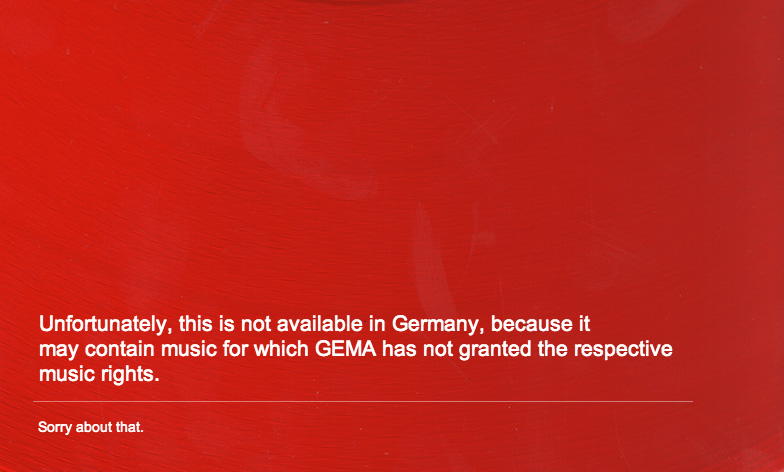