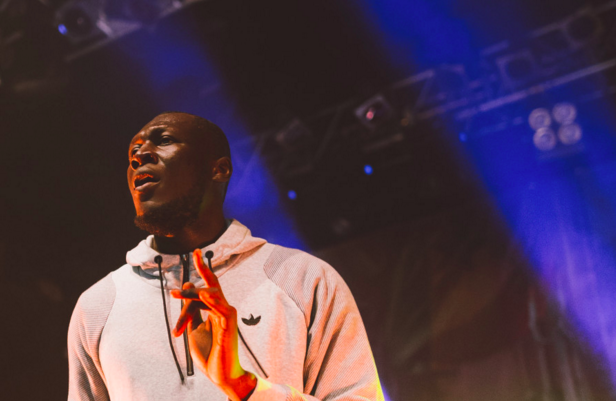 Also unveils his love of Louis Theroux in a new interview.

Stormzy’s eagerly-awaited debut LP Gang Signs & Prayer drops next Friday (February 24) and is already on course to grab the #1 spot in the UK Charts based on pre-sales.

We already know that the album contains 16 tracks and features appearances from Kehlani, Ghetts, J Hus, Wretch 32, Mnek and Raleigh Ritchie, but in a new interview with the Guardian today, Stormzy has revealed more details about its themes and tones.

The grime star talks about the ‘vulnerability’ of the album, using touchpoints like “pure, touching, reflective” as well as “explicit, raw, horrible”. He describes ‘100 Bags’ as a “sad tribute,” while explaining that ‘Blinded By Your Grace’ is about God.

“One of the things that I’m most impressed by, in God, is the grace that he has,” says Stormzy of the song. “No matter what we do, there’s always this, ‘OK, it’s fine. I understand.’ That’s not to say I can go out and do something bad… But just that knowing that someone’s got you throughout anything, and they’re not going to judge you, they’re just going to understand your situation. That grace.”

He calls the album’s final track, ‘Lay Me Bare’, a “whirlwind of emotions” that explores the Croydon-born star’s disdain for his father, who was wasn’t around as he was growing up. He says the song was made in one day, while the rest of the album was put together “neatly” and “strategically,” “like a jigsaw in my mind, but I’d already completed the puzzle.” “So respect me the same way you’re going to respect a Frank Ocean or an Adele,” he demands.

Stormzy says he hopes the album will empower young black men. “So I need to talk to my young black kings, because I’m one of you, we who are always last. And I say to them, ‘You are sick, you’re nang, you can do this. You’re better than anything anyone’s ever told you that you are. You’re just as powerful as me.”

The ‘Shut Up’ artist turned up to the interview in a Louis Theroux T-shirt and proceeded to reveal his love for the filmmaker and broadcaster, calling Theroux “a G,” before adding: “I take my hat off to him, he’s good!” Theroux later tweeted in response, saying he was “honoured.”

@Stormzy1 So honoured to see this! Great interview too. pic.twitter.com/XaREEtyRci

In the same interview, Stormzy heralds a new experimental era of grime: “A lot of it is going to be wrong because it’s new, but we shouldn’t be scared to do it.”

Read next: Stormzy claims his front door was kicked in by police this morning