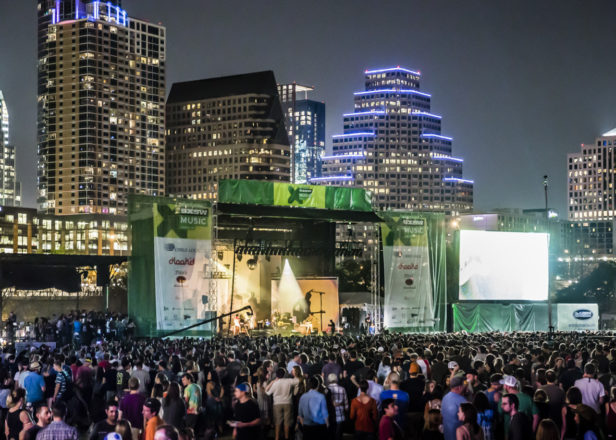 A local Austin musician was shot during SXSW in an armed robbery on his way home from a show.

As the Austin Chronicle reports, Michael Sanders, who plays lead guitar for indie band Löwin, was shot in the shoulder while walking home from A Giant Dog’s performance at Hotel Vegas on Friday evening (March 10).

According to Sanders, three armed and masked men leapt out from behind bushes near his home and took his money and mobile phone. Sanders was then shot in the shoulder as he attempted to walk back towards his house following the robbery.

“It wasn’t as scary as it was matter of fact and surreal,” Sanders told the Austin Chronicle. “My first thought to myself was ‘Oh my god, he shot me.’ My second thought was realizing that it didn’t hurt as bad as I would have expected. As far as getting shot goes, it was a very clean shooting. I’m fortunate…because they were trying to kill me.” According to the Chronicle, Sanders believes the robbers were preying on people coming home from concerts. No suspects have been identified as yet.

Last year, a lone gunman was arrested for firing gunshots into the air in a crowded area at SXSW, while in 2014, four people died and dozens were injured after a driver plowed his car into a crowd.

Meanwhile, an Italian band was jailed for illegal immigration and deported while trying to enter the US for SXSW last week. The festival was recently criticized for a contract clause that specified SXSW would notify authorities if a performer was in America illegally, but they later amended the contract to remove the controversial section.