Nothing but a G Perico thang: LA rap’s charismatic new king on fatherhood and All Blue

South Central rapper G Perico has been grinding hard since 2012’s Tha Innerprize and finally reached a wider audience with last year’s acclaimed Shit Don’t Stop. After the release of his major label debut All Blue, Perico talks to Torii MacAdams about jail, fatherhood and having no regrets.

G Perico sees the world in one color: blue skies, blue bandanas, blue Chuck Taylors, blue hair rollers. The Jheri curled rapper’s Pantone preference was honed by his membership in the Broadway Gangster Crips – but, at 29, the father and ex-con is trying to change.

He has a clothing store, So Way Out, to operate – even if the cops think it’s a drug front – a daughter whose private school tuition won’t pay itself, and his recent album, All Blue, is an excellent, cutting, concise 35-minute tour of his South Central turf. This is the new Perico, the focused Perico.

“I’m making up for the time I wasted as far as being a legit citizen. I’m behind on that”

G Perico’s second prison stint – about a year in the standard-issue blues of San Luis Obispo’s California Men’s Colony – is the line of demarcation in his career. He released his debut, Tha Innerprize, the day he surrendered to authorities on a gun charge in September 2012 and, while incarcerated, producer Poly Boy cobbled together Tha Hiatus from unused verses Perico had recorded before his upstate sojourn.

But, in Perico’s mind, these weren’t serious attempts at artistry – not as serious as Cripping, anyway. The brutality and privations of prison appear to have had a chastening effect; after being released and narrowly avoiding a massive racketeering indictment, Perico recorded Tha Innerprize II and Shit Don’t Stop. As his closest friends were murdered, imprisoned, indicted, or, scandalously, turned state’s evidence, he became a local phenomenon.

Given his outsized rap persona, I thought G Perico would be bigger. Like me, he’s a medium-shirt-as-hell dude. Unlike me, when he walks into a room, charisma and magnetism drip-drop from his curl with every stuttered beat of his hitched gait. He’s not ice cold, but calm and cool, and the only time he seems at all shaken is when his first headlining show is mentioned – he’s more worried about selling out The Roxy than pissing in a cup for some hard-assed parole officer. So, he’s changing. 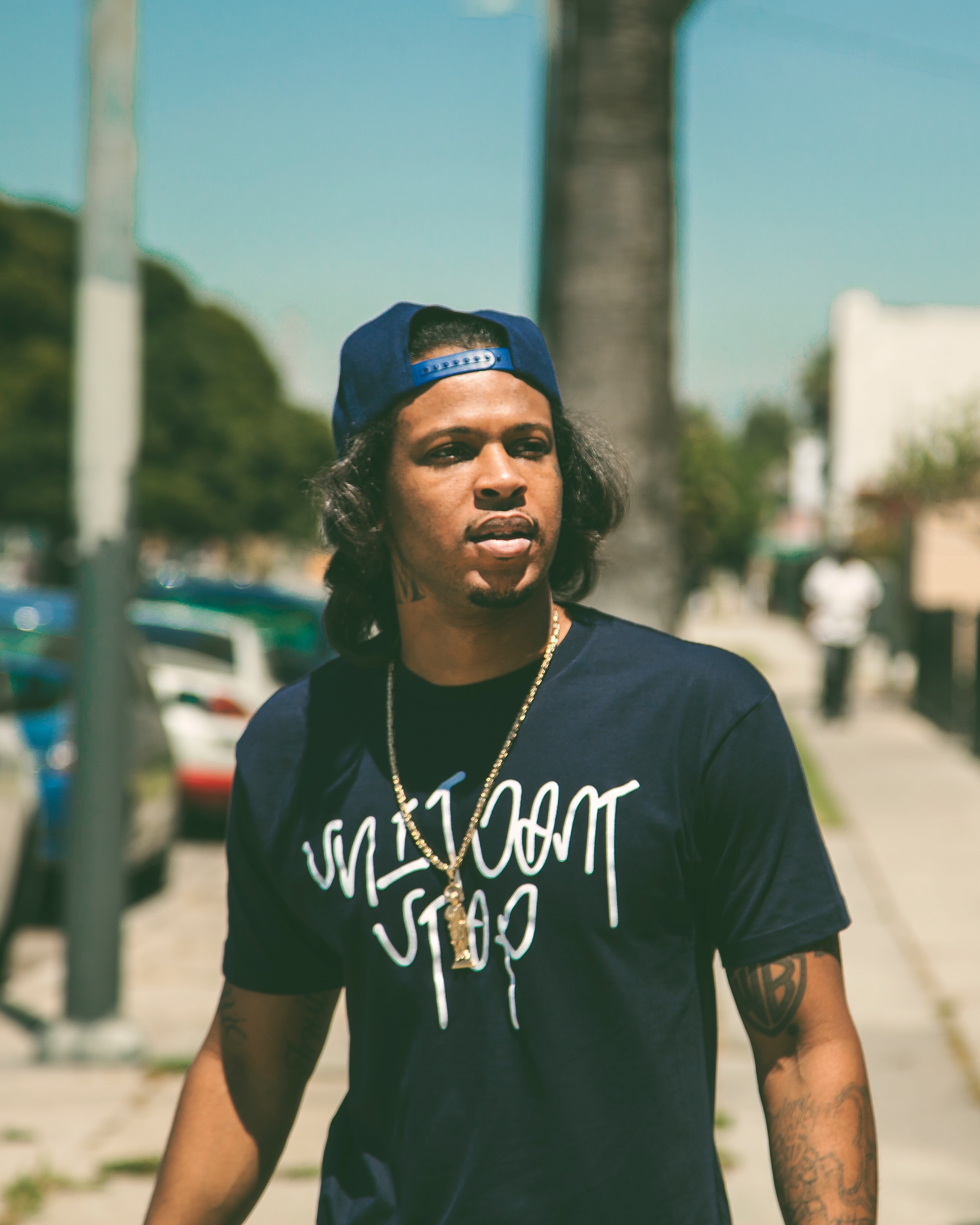 When you’re making music, who do you imagine listening to it?

Right now, I think about niggas in the spot, people in the streets, people in a concert. I do write with that in mind. Shows [and] the streets first. With the streets it’s: “Can they get this?”

Has that changed at all since 2012’s Tha Innerprize?

Naw. The first Innerprize, I really didn’t have shit, and I wasn’t even really trying to rap. PC used to be at my studio everyday – he was YG’s boy ’n’ shit – and I’d just leave him the key. They were songs he helped me with, and I put them together on a CD. I was on my way to jail, so I was like, “I’mma drop a CD – fuck it.” I was a local rap celebrity when I came home.

How did you pass the time in prison?

Exercising – I was kinda buff when I got out, I don’t exercise at all now – reading, writing. I never rapped for nobody in jail. Because the shit was so typical. In jail you got a gang of niggas beating on they chest, singing, beating on the table. I used to just look at niggas like, “Man, that’s not really what I do. I do gangster shit.” I think I was running from my destiny, maybe. Man, exercising, cell phone – getting naked pictures – smoking weed, all type of shit. Tattoos – I didn’t get no tattoos last time I went.

At first, I was reading them urban gangster books like Dutch, B-More Careful; I couldn’t really get into Iceberg Slim’s shit – it was too far out. I just didn’t get the generational gap. But then I started falling into self-help, like The Art of War, Rich Dad Poor Dad, a slew of books like that. Shit to help you focus.

What’s the biggest change in your life since Tha Innerprize II?

The biggest change is just the opportunity, and I’m seeing it. And I just know that I’ve gotta pick a side, and I picked the side that I wanna be on: that’s this music business. I mean, that’s the biggest thing: more doors opening. I’m getting more understanding about shit, too, like life experiences. I’m evolving at a fast pace right now.

Do you feel like you’re making up for lost time?

Hell yeah, that’s why I be on this muh’fucka right here [points to manager, Pun]. Like, “Be patient”? Bro, I was fuckin’ up! I feel like I was behind, so I gotta gas, you know?

It’s not even financial – it’s status. I feel like I’m supposed to be at a certain point. If I was still in the street, I’d be at the top of the food chain on some gangster shit, but where’s that end? In actual, real life, there’s times I had way more money – like loads, shoeboxes full of money – but it was short-lived. And you can’t even really do shit. Now, I got credit. I can move way better than I could with loads of money. I’m making up for the time I wasted as far as being a legit citizen. I’m behind on that.

“My life has to be in order – not on no gangster shit, but on some real life shit”

Why’d you start the So Way Out store?

Because I didn’t want to sell dope. [Laughing] I could’ve easily went and got a spot and did the same shit, and been a few hundred up by now. But you’ve gotta pick that side. That was like a test of me picking a side. Like, I’ve got all that extra energy. I don’t think I’ll ever be good at just doing one thing, y’know what I’m saying?

It was just necessary for me, at the time, to have something to keep me busy and kill that idle time because I’ll be getting that itch for the street shit. I’ll be ready to say “Fuck everything” sometimes. [The store] was a big piece as far as me keeping it together, because it was a legit responsibility, something I could put my face with and I don’t gotta be looking over my shoulder as far as the law is concerned. The police in my area, I don’t think they believe it. They even raided my shop! Probably thought I was gonna have guns, dope, whatever. But I’m actually on some shit right now, [and] a lotta people are surprised.

What are some of the challenges of being a black business owner?

I would say in the black area – especially my area – people don’t know the power keeping money within the community. That could sponsor big growth for everybody. That’s the biggest thing I be trying to stress: let’s circulate these dollars and save. That’s not really not for me – I could go off and get some money – it’s being worried about the people.

Do you feel like being a parent has changed your outlook on life?

Yeah, it definitely has. I can’t think for only me now – and that’s what got me a lot less reckless. Because at first I never really wanted kids, like, “I’m about to live my shit on the edge to the end.” And then I got a daughter, and I’m going through some shit with that with her mom.

My life has to be in order – not on no gangster shit, but on some real life shit – because she a girl, and if she’s anything like me she’s gon’ be a hoodrat and fast. And that’s not cool for a girl. I gotta get my shit in order and have a foundation. Something for her, so she’ll be ahead in life when she gets older. It’s made me buckle down and do a lot more sacrificing as far as enjoying myself. Can’t just think about myself.

Do you think it’s surreal people that people take your music seriously?

Hell, yeah! It’s crazy how people in the city that’s not supposed to be showing me love. Like today, I was in the back of my homie’s shop on Crenshaw, and some Neighborhood niggas walk up: “Ey, ain’t you whoopty-whoop? Man, I love your shit, homie!” And, in all actuality, they supposed to have a little issue wit’ me, depending on how they feeling. I’ve been getting a lot of unexpected love, people quoting my shit, the ratings. The shit is crazy. I love it, though.

“There’s nothing I did that I can’t live with. I wouldn’t change shit”

What do you worry about?

I’ve fucked off so much time just being a dickhead – “I ain’t doin’ nothin’ else but this nigga shit” – that, looking at a lot of my older homies, a lot has sunk in. I know where I don’t want to be. I don’t wanna be no nigga in his 30s that don’t got shit, or have somethin’ for a minute, go to jail, in ‘n’ out. I got a daughter, [and] if she grows up fucked up, that’s [me] basically being a loser. I can’t be a loser. I don’t think I was put here to be a loser-ass muh’fucka. I got a voice, and people have taken to it. I gotta win. I gotta be a productive muh’fucka.

If you could change things in your past, would you?

And, I never did no fuck-ass, punk-ass shit. I might’ve fucked a couple bitches that I wasn’t ‘posed to fuck, [or] committed a crime at the wrong time and got caught, but there’s nothing I did that I can’t live with. I wouldn’t change shit. I’m gon’ keep it the same: G, The Ghetto President.

Read next: Sibling revelry: How Starlito and Don Trip bring out the best in each other on Step Brothers