Jesse Kanda has issued a statement in response to claims that The Horrors ripped off his work.

Earlier on this week, artist David Rudnick took to Twitter to point out the similarities between The Horrors’ new single artwork and the visual artist’s unmistakable aesthetic. It was also alleged that Kanda had been asked by The Horrors to design their cover, but declined.

After it was suggested that Kanda’s work takes its cue from Aphex Twin collaborator Chris Cunningham, Kanda defended The Horrors. “At first I felt a bit territorial,” wrote the visual artist in a note on Twitter. “And since people were defending my work, I unsympathetically thought it amusing to watch.”

He continued: “But when I started seeing some people accusing some of my work being just as similar to some of Chris Cunningham’s work, who had collaborated with The Horrors before, my stance shifted…and I am so grateful for this.”

Kanda praised the influence of Cunningham on his work, explaining that if “I hadn’t discovered his art in my adolescence, I wouldn’t have made some of my art the same way.”

“So those people flipping the mirror back at me allowed me to simultaneously feel how maybe The Horrors are feeling about their artwork,” he offered.

Kanda also riffed on the idea and art and originality: “I will always hold in the highest regard the struggle and pleasure of finding ones’ unique voice as an artist. That said, in defence of both The Horrors and I, as well as every artist ever, sometimes we might step on each other’s toes, but that’s actually out of love and admiration, coincidence, or even unconscious echoing too.”

my statement regarding The Horrors artwork, originality, territoriality and what I learned from this experience. thank you pic.twitter.com/mGqLvGolgg

The Horrors’ Tom Furse tweeted the following reply in gratitude. 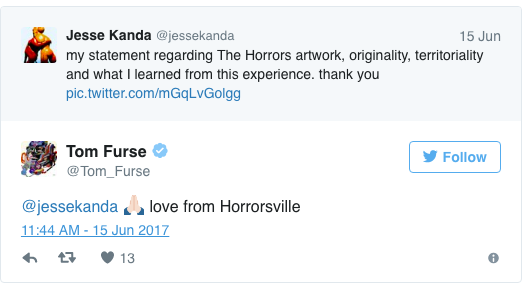