The pair have worked on and off together since 2002.

Out February 16, the LP is a recording of a live improvisation by Sakamoto and Noto at the architect Philip Johnson’s Glass House in Connecticut. Rehearsing only one day before the performance, the duo experimented with a keyboard, mixers, singing glass bowls, crotales and the architecture of the building.

The recording was informed by an exhibition at The Glass House of work from 87-year-old Japanese artist Yayoi Kusama, which comprised the installation ‘Dots Obsession – Alive, Seeking For Eternal Hope.’

“When I was offered to perform at The Glass House, the first idea that came to my mind was to use the house itself as a musical instrument,” says Sakamoto of the recording, adding that it was “100 percent improvised.”

Sakamoto continues: “Looking at the beautiful landscape through the glass wall with Kusama’s dots was something, and it affected me, affected us, I should say, a lot. It’s a strange mixture of natural, nature, and artificial things, art.” See the album artwork below.

Glass marks the first live collaboration for the pair since Sakamoto’s 2014 cancer diagnosis and subsequent treatment. Noto and Sakamoto have worked together since 2002, releasing six albums in total.

Last month, it was revealed that a 15-year-old live recording of a performance by Alva Noto with Mika Vainio and Ryoji Ikeda is set to be released in January. 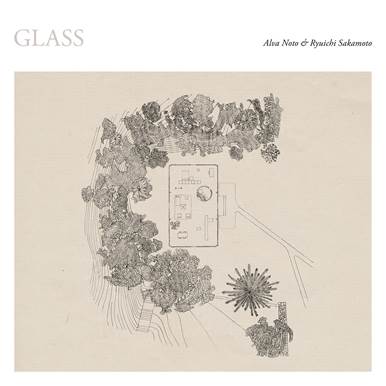