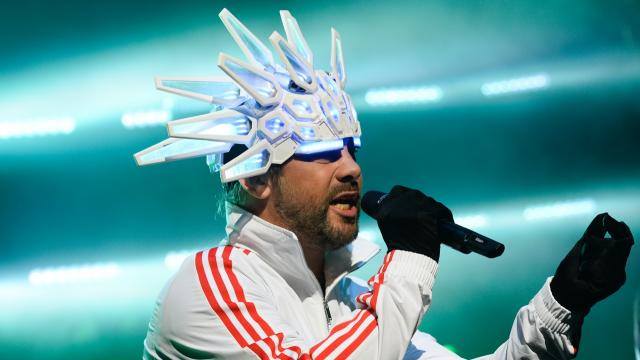 The lineup for Coachella 2018 has been announced and as heavily rumored, Beyoncé, Eminem and the Weeknd are to headline. Curiously high on the bill, however, before esteemed names like St. Vincent, Vince Staples and Kelela, is mad-hatted ’90s lounge funk favorite Jamiroquai. Yes, Jamiroquai.

Jay Kay and co. never quite cracked America in their heyday, reportedly losing over £50K on their last US tour which was designed to cash in on the success of ‘Canned Heat’-featuring comedy Napoleon Dynamite.

Understandably, Music Twitter had a few questions after the lineup dropped last night. Questions like: “how in the world is Jamiroquai further up this bill than the all-conquering queen of 2017, Cardi B?” “Who did Kelela hurt to be relegated to font so small you have to squint to see it?” And in the case of Coachella’s younger ticket-holders: “Jamiroquai’s the guy with the hats, right?”

How in the year of our lord 2018 are Jamiroquai so high up this bill? pic.twitter.com/Z4HgX4oPkl

Are we all going to sit here and act like Jamiroquai's placement isn't even a little startling? https://t.co/EncZlksazF

JAMIROQUAI: i dunno, i feel like i’m Migos famous

JAMIROQUAI’S MANAGER: I got u

Jamiroquai fans will point out that the Jamirrenaissance, as everyone should surely be calling it, began last year and has picked up more than enough steam to warrant their high billing.

And though critically, Jamiroquai may have been somewhat derided over the years in America and the UK, elsewhere they’ve maintained a fiercely loyal fan base: in the time since that ill-fated 2005 American tour, they’ve have entertained crowds in Caracas, Tbilisi, Kiev, Budapest, Gran Canaria, Rotterdam, Bogota, Buenos Aires and pretty much everywhere else but north America.

Anyways, it doesn’t matter much. As others pointed out after Coachella’s lineup announcement coincided with a certain orange hotelier-turned-demagogue banging on about the size of his “button” compared to Kim Jong Un’s, we’ll all no doubt be dead long before the desert festival takes place. Happy new year, everyone!

Coachella, also featuring Migos, SZA, Miguel, the War on Drugs and many other artists who are not Jamiroquai, takes place between April 13-15 and April 20-22.

Read next: Coachella 2017 review: An escapist experience whether you like Migos, Hans Zimmer or both