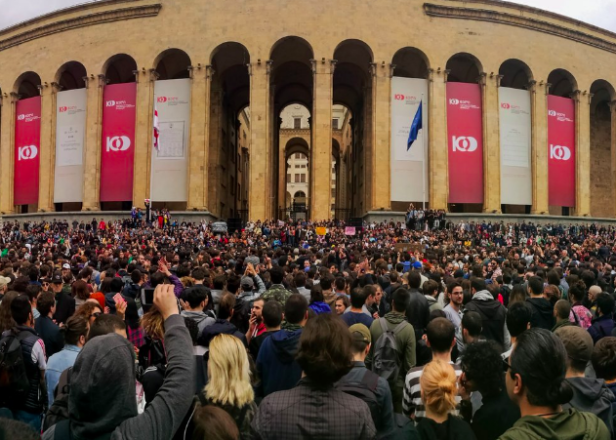 Two of Tbilisi’s leading clubs, Bassiani and Café Gallery, were raided at the weekend.

Georgia’s minister of internal affairs, Giorgi Gakharia, has apologized to protesters in Tbilisi for the armed police raids of Tbilisi nightclubs Bassiani and Café Gallery that took place on Saturday morning (May 12).

People began gathering in Tbilisi on Saturday to protest the raids, with a second day of demonstrations taking place yesterday. As RA reports, Gakharia addressed the crowds outside the parliament building in Tbilisi on Sunday evening to apologize “not only on my behalf, but on behalf of any representative of the Interior Ministry if he endangered you or your security.”

He continued: “At the same time, I’d like to ask you, who insulted people wearing uniforms and were protecting your security, to apologize to them.” Gakharia also addressed Georgia’s zero-tolerance drug policy in his statement. “I also promise that we will achieve specific results in the direction of drug policy. And if promises are not kept, we will always be able to dance or listen to music in a free city.”

Special forces entered the clubs on Saturday as part of the government’s response to five drug-related deaths in the past two weeks, which the authorities claimed were linked to Bassiani. However, a statement from Bassiani last Monday claimed that “none of the tragic deaths have occurred on the territory of the club.”