After years of hype, we’ll soon be able to get our hands on Oculus Rift.

The home virtual reality system was officially launched yesterday (June 11), and it’ll be available to the public in the first few months of 2016. Yesterday’s press conference sold it primarily as a device for gamers, shipped with an Xbox One controller – and that’s who’ll be buying it to begin with. However, it’s clearly aiming to be much more than that.

Facebook founder Mark Zuckerberg is already banking on its success. The company acquired Oculus VR last year for $2 billion, part of the company’s mission to “make the world more open and connected,” saying at the time that he saw Oculus Rift as more of a “a new communication platform” than a simple gaming device. It might take a while, but we can fully expect to be walking inside Facebook and talking to our friends face-to-face in the next 10 years.

Before that though, the entertainment industry will be looking to capitalise on it in any way they can. With 3D losing its lustre at the cinema and in the home, it will give us a new reason to spend money on movies as well as games. Though yesterday’s press conference didn’t make it obvious, it will change the way we consume and make music too.

If there’s one thing that the current battle between Spotify, Tidal and Apple Music has demonstrated, it’s that the future of streaming music isn’t just about audio – it’s about video too. One of Tidal’s key strategies is to offer exclusive concerts and behind-the-scenes video to fans. Spotify wants to throw video clips into our playlists. Apple wants to put music videos in the same place as an artist’s catalogue. It all boils down to the same thing – offering fans better ways to interact with their favourite artist. What better way than to live stream concerts specially tailored for a VR experience?

This wouldn’t be limited to simply playing back the same type of simple live-stream we see so much of through your headset either. In 2013 Chris Milk directed Hello, Again, a Beck concert filmed with custom 360-degree audio/video cameras placed at strategic points throughout a spherical space. Using an Oculus Rift headset, users can choose between camera, and even turn their heads to view their surroundings from each viewpoint. Paul McCartney also got into the game quite recently. With live concerts such an important part of Tidal’s strategy to gain subscribers, it seems likely that the company or one of its rivals will begin offering Oculus Rift experiences to gain paying subscribers. 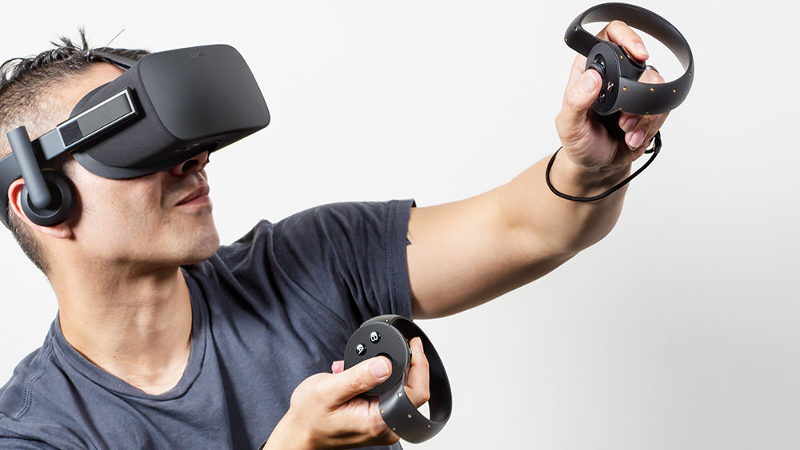 Oculus Rift will ship with an Xbox One controller, but the more exciting input method is Oculus Touch. A pair of hand-held motion controllers, the aim is not just to provide control, but to create an extension of your hands visible in the virtual environment. As well as tracking your hand’s motion and relative position, a ring of sensors will be able to detect when you make gestures like a wave or a thumbs up. Haptic feedback will help you feel what you’re interacting with too. It’s a far cry from the clunky controllers we had in the 90s iteration of VR.

While the possibilities for first-person gaming are obvious, Oculus Touch could offer new possibilities for music production too. People have been hacking Nintendo Wii remotes and turning them into MIDI controllers for years, using their motion control capabilities to make them do everything from control filters to create theremin-like sounds.

Oculus Rift already has an application for controlling Ableton Live, Pensato. It’s basic, but demonstrates that the system can be used to make music quite comfortably. The freshly-announced Oculus Touch controller looks to be capable of far more than a Wii remote, and more importantly, should be a lot easier to develop for. It’s unlikely it will replace instruments, but we could see Oculus changing interfaces in the same way iPad apps have – think Reactable-like interfaces in a virtual environment.

Directional sound isn’t just the preserve of games and movies – it’s beginning to gain a foothold in music too. There’s 4DSOUND and the open source Envelop for example, both aimed at creating three-dimensional sound experiences for live performance. There are artists who create music for directional audio installations like Mark Fell and Graeme Truslove. Believe it or not, there’s also a Grammy award for Best Surround Sound Album. It’s rare that anyone would be able to experience these at home though – even if you have a surround sound system, it’s unlikely you’d use it to listen to an album.

Oculus Rift could change that. The headset’s headphones are fully wired for spatialized audio – essential for immersive environments, but also capable of offering the directional audio a regular pair of stereo headphones can’t. With a solid user base, we could see more artists creating surround sound music for home listening through Oculus Rift. Major labels will probably stick to making the same music with big scale surround sound, but in the world of independent electronic music this could open up new possibilities – Holly Herndon’s recent album Platform already has moments of ASMR where it feels like someone’s whispering right behind you, and she could probably do incredible things with immersive sound.

Collaboration is important to most musicians, whether you’re part of a band or just getting together with a friend in the studio to record a one-off track. However, it’s not always the easiest thing to manage – if you live in London and want to make a track with someone in New York it’s expensive to get together, and doing things remotely can be frustrating. Oculus Rift on the other hand opens up the possibility of working with other musicians inside a virtual environment.

There’s currently no example of a virtual studio environment for Oculus Rift yet beyond the previously mentioned Pensato. Furthermore, it could be tricky to play physical instruments wearing a headset – but it doesn’t seem out of the question something like that might become a reality. Communication is the reason it was purchased by Facebook, and the company will undoubtedly be working behind the scenes on making face-to-face communication using the system a reality.

It feels very much like the music video’s blockbuster days are behind it. Gone are the days when Michael Jackson and Madonna’s teams would spend millions of dollars on a promo for MTV; though there are still some great videos out there, a lot of videos are DIY affairs or afterthoughts to throw into the content stream. With Oculus Rift, there’s every chance we could see a new arms race to throw cash into making bigger and better music video experiences for virtual reality.

We’ve already seen a few. Earlier this year Björk released a 360-degree video for ‘Stonemilker’, while Squarepusher released a VR video for ‘Stor Eiglass’, allowing you to jetpack through a cartoonish CGI world. Currently VR videos feel very much in their infancy – even Björk has admitted that “perhaps we dont even have the best tools yet,” but with enough vision, imagination and above all, cash, there’s no reason why Oculus Rift can’t give us something as good as ‘Thriller’. In 2010, Kanye West made an entire film to promote ‘Runaway’ – imagine what he’d do for Oculus Rift.