Power Ambient: The sound of 2014 (if you were listening closely)

Some called it a revival, others didn’t, but 2014 undoubtably saw a wealth of great ambient records released. In this end-of-year piece, Maya Kalev hones on on a selection of records that she groups under the deliberately vague header – though not quite a sub-genre – of “power ambient”, from artists such as Ben Frost, Motion Sickness of Time Travel and Jefre Cantu-Ledesma.

Although “power ambient” seems like an oxymoron, it’s a useful catchall term for music you could very loosely group with ambient, but that also shares characteristics with extreme styles and dance music, drawing on doom, drone, noise, dub, industrial and techno.

Where ambient is apt to wash over you, power ambient demands you pay attention to its constant shifts in mood and intensity. Played at low volumes it can be quite soothing, but by and large ambient’s relaxing qualities don’t apply here. This music is altogether harsher and meatier, rough with grit and teeming with motion, even as it keeps much of the space and stillness of ambient music at its heart. The DJ and blogger Chris SSG provided a nice summary of power ambient alongside a mix of the kind of music he likes to play in his warmup sets, which included tracks by Paul Jebanasam and Barnett + Coloccia. He wanted to include “music that was strong but balanced,” he wrote by way of explanation, “Perhaps you could call it ‘power ambient’ – there is force to the music, some of it has certain gravity, but it is not meant to be overpowering.”

This has been a banner year for records that can be grouped under the deliberately vague “power ambient” umbrella. Lawrence English’s phenomenal Wilderness of Mirrors, arguably the Australian producer’s best work to date and one of the finest records in any genre released this year, is as good a place as any to start. It’s heavier than many of English’s earlier albums, though the details are as fine as ever: processed organ and piano meshed together with synths and scraps of field recordings and found sound. The result is smudged without being indistinct, its filigree detail adding density to its ominous weight rather than detracting from it. Shade Themes from Kairos, Stephen O’Malley, Randall Dunn and Oren Ambarchi’s extended score for the short film Kairos, is similar in that respect. Recorded in a disused Belgian studio with a huge range of instruments and finished at Dunn’s studio in Seattle, it mirrors the film’s theme of temporal manipulation with dense layers of percussion, monumental drones and lashes of noise pitted against a vast expanse of empty space.

Although this year Subtext didn’t quite reach the heights of Roly Porter and Paul Jebanasam’s spectacular 2013 LPs, Eric Holm’s debut Andøya, and Nimbes, a collaboration between label co-founder James Ginzburg and Yair Elazar Glotman, nevertheless made for another strong year for the Bristol label. Holm developed Andøya from a single recording he made at a telegraph pole on the arctic island that gives the record its name. If an album developed from a single recording sounds repetitive or dry, it’s quite the opposite: a work whose cold, industrial atmospheres are never less than compelling. It’s a terrific fit for Subtext, a label whose artists, by coincidence or otherwise, frequently cast space as a key player. Take Nimbes, for instance, whose contrabass and percussion were recorded in Berlin’s Kraftwerk power station, Ginzburg and Glotman deploying the reverberation of the industrial interior to chilling, evocative effect. 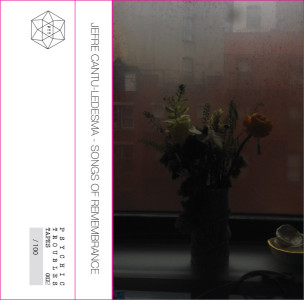 Many of 2014’s best “power ambient” LPs lay at the intersection of noise, dance music and ambient. Ben Frost delivered his most fully realised album to date with A U R O R A. Directly inspired by a trip Frost took to the Democratic Republic of Congo, where he also made field recordings and wrote much of the album, it portrays an exaggerated, semi-fictionalised space, giving sonic form to the brutality of civil war and the harsh landscapes that have hosted it for over two decades. Not explicitly rooted in a single specific experience but no less immediate or potent was Peder Mannerfelt’s Lines Describing Circles. Not enough people got excited about that record this year and I expect they will come to regret it. As you’d expect from one half of Roll the Dice, Mannerfelt takes to the album format beautifully: although individual tracks fit nicely into Lines Describing Circles’ overall narrative arc, they’re never subservient to the whole, each piece a riot of abrasive textures, crushing dynamics and thunderous bass. Tight sequencing and a strong sense of narrative also shape Kangding Ray’s Solens Arc. Tracks grouped into four sections and split into beatless pieces and those driven by an inexorable marching rhythm make up a distinct arc. Unusually for this selection, many of the tracks work well independently of the album as a whole, too; speaking from experience, it’s all too easy to listen to the savage thump of ‘Blank Empire’ or ‘Amber Decay’ on endless repeat.

Also on the excellent Digitalis label, Ill Fares The Land, the debut LP by Lumisokea’s Koenraad Ecker, is a nice companion to Mannerfelt’s album. Less punishing perhaps but every bit as blackened and portentous, its austere electronics and slashes of white noise are the perfect foil to the rasp of Ecker’s ’cello. Jefre Cantu-Ledesma was also on fine form this year, releasing a number of excellent records, of which my favourite is Songs of Remembrance. The short, intense pieces that make up this suite skitter across moods, with nostalgia provided by viscous synths and wan melodies, while deep bass rumbles and sheets of white noise rise that dissolve as rapidly as they rise inject the atmosphere with intense drama.

Of the records that drew more heavily on dance music and dub than noise and drone, two of the best came from an old hand and a new act. Mika Vainio’s signature frozen sound spaces on Konstellaatio, his first Ø album in six years, seem less barren than usual, and gorgeous melodies act as a foil to his characteristically vicious sub-bass and cavernous echo. Blackest Ever Black had a piece of the action too, in the form of the self-titled debut EP from Killing Sound, the trio of Young Echo members Vessel, Jabu and El Kid. The four tracks of Killing Sound are stark and slow, and heavy with latent menace. Killing Sound also released a ferocious extended rework of the EP standout ‘Six Harmonies’, $ixxx Harmonie$ Version, on a separate one-sided twelve-inch, but I prefer the subtle, haunting power of the original.

In contrast to all the gloom, Zelienople drummer Mike Weis and Motion Sickness of Time Travel released records on the more peaceful end of the power ambient spectrum that nevertheless packed plenty of heft. Don’t Know, Just Walk, Weis’ solo debut for Type, is one of the year’s most enveloping, tender records. Comprising three tracks of twinkling gong hits, thick, foggy drones, field recordings and muddy percussion built into monumental shapes, it’s at once fearsome and delicate, contemplative and turbulent. Motion Sickness of Time Travel also spent 2014 quietly putting out a terrific series of CDr and digital albums on her Bandcamp, droning nocturnes for synthesiser and voice named for full moons occurring at different months of the year. My favourites are Ballade for a Cold Moon and Ballade for a Flower Moon, but you won’t regret spending a rainy afternoon with the lot. Looking back on the year, it’s all too easy to brand the swathe of excellent albums grouped under the nebulous power ambient title as a trend, but that seems a tad over-simplistic. I’m by no means suggesting we’re witnessing a revival or the stirrings of a new movement, only that 2014 has proven an excellent vintage.