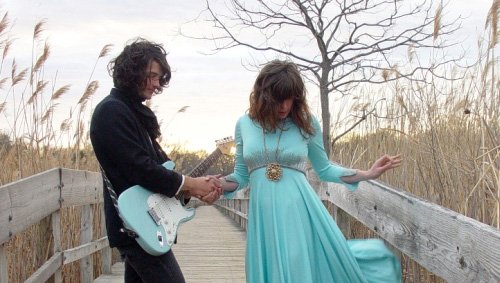 In an interview with this week’s NME, sepia-poppers Beach House get rather lavish about their forthcoming fourth album, Bloom.

According to Alex Scally, one half of the group, Bloom – co-produced by Chris Coady, who worked on the most recent albums by Cold Cave and Gang Gang Dance – will be “their own Pet Sounds or Disintegration, not in sound, but as something which feels like a definitive statement.”

“I could make the pop music I hear on the radio”, Scally continues. “Victoria [Legrand, Beach House vocalist] has a great voice – we could easily churn out a Rihanna hit. It would take about 15 minutes. And then she’d just have to wear no clothes and I’d have to get a tattoo or something or something, and then the next thing we’re huge for, like, five minutes. But if that was going to be our course, it would’ve happened a long time ago.”

Back to the new album, Scally compares it to “a huge crystal, spinning in a cave with Star Wars figurines.” God knows. Victoria Legrand’s description of Bloom is a little more straight-forward: when pushed on the record’s lyrical themes and subject matter, she brings up “Death, loss of innocence… As we’ve got older and evolved, it’s normal that there would be darker themes. But there’s lightness. It’s not all dark.”

For those intrigued, the first track to hear from Bloom is streaming below. It’ll be released on May 2012.