For Tony Donson, a childhood obsession with Sega games ended up being the basis for his music career.

After becoming enamoured with one game in particular – Sonic The Hedgehog – it felt natural for him to name himself after the Japanese version, and as DJ Sonikku, Donson uses the Sega Mega Drive’s Yamaha YM2612 sound chip to make 16-bit house tracks with a distinct ‘80s slant.

Donson is from Derby in the Midlands but, he says, “nothing really happened there,” so in 2012 he decided that it was time to relocate and come to London, where he started building the foundations for his current musical project. With the sound chip and certain ‘80s influences (notably Janet Jackson and Madonna) in tow, Donson put together his debut EP, Secret Island, recently released on Lobster Theremin sublabel Distant Hawaii. Using vintage drum machines (Roland’s TR-707, 727 and 909 to be exact), he punctuates the tracks’ breezy, aquatic atmosphere with dusty, lo-fi percussion.

As we sit together in a Japanese restaurant in London, he tells me his specific vision for DJ Sonikku. “I want to project a happy, accessible image because I’m not exclusive,” he says. “I’m not concerned about being cool at all, I’m more concerned about making people happy.” During our conversation he delves into the process of making music with the Yamaha YM2612, fan-made Sega tracks and the vision behind Secret Island.

What was your first experience with discovering music?

I didn’t have musical parents at all. My first discovery of music was through playing Streets of Rage on the Sega and going on the sound test menu and listening to all the songs from the stages. It was an early introduction for me to house and techno before I even really knew what they were. I didn’t know what house music was as a word, but as music and sound I knew what that was. That spiraled on to where I am now.

Was Sonic The Hedgehog one of your favourite games?

It still is. I got a Sonic game for Christmas from my grandma and I’ve been playing that nonstop. [Laughs] I love what he represents. Obviously the music to the Sonic games is something that’s guaranteed to be good.

When did you decide you wanted to make music with the Sega Mega Drive?

It just sounds so iconic, the Yamaha YM2612, I really like how gritty it can sound and metallic. You can also make really nice smooth, jingly sounds with it which is amazing. That’s what attracted me to using that. It was such a big part of my childhood because we couldn’t afford a PS1 so I had to use a Sega, which was previously my brother and sister’s console. I was probably playing the Sega in maybe 1999, 2000.

I feel like I’m a generation behind my generation in terms of musical influences. I mainly listen to ‘80s music and I follow it to an extent, but I don’t follow new music as much. I connect a lot more with the heavy drum patterns of ‘80s, speaking about pop music, and how powerful that was. Pop has changed to become more of a consumable product, it’s been diluted and is more about projecting an image. In the ‘80s it was about that but also the music was there. I love to recreate songs using the Sega, and the Sega does have a really amazing drum pack.

So do you have versions of ‘80s tracks just lying around?

I do! I really just want to create a compilation of my take on ‘80s songs. I mostly listen to Janet Jackson dubs, I’m a big fan of Madonna. The mix that I did for NTS is all ‘80s. I didn’t mean to do an ‘80s mix but that was just what I was listening to.

Are you quite a perfectionist with DJing and producing?

I am. It drives people quite mad. I have a vision and I’m really passionate about it and that’s how I want it to happen. I wouldn’t say I strive for perfection because I don’t think my songs are perfect, there’s this lo-fi edge. But I do have a specific way of working and it’s hard for me to navigate around separate opinions. I think passionate would be the word. Jimmy [Asquith] runs the label and I ask him about 10 questions at once and send him a song a day, and it’s just funny because he’s like, “This is amazing but you’re sending me too much!” [Laughs] But he really loves it. I’m just really passionate and excitable. It’s better than not sending any music.

What was the specific vision for Secret Island?

I imagined creating a level in Sonic. It’s an island that is untouched by humans and there’s lots of mystery surrounding it. We don’t know if there’s lost civilisation surrounding it. It’s basically a floating island going around in the sky and it’s a paradise for the animals and things that live there. The music reflects what it would feel like to discover that island for yourself. 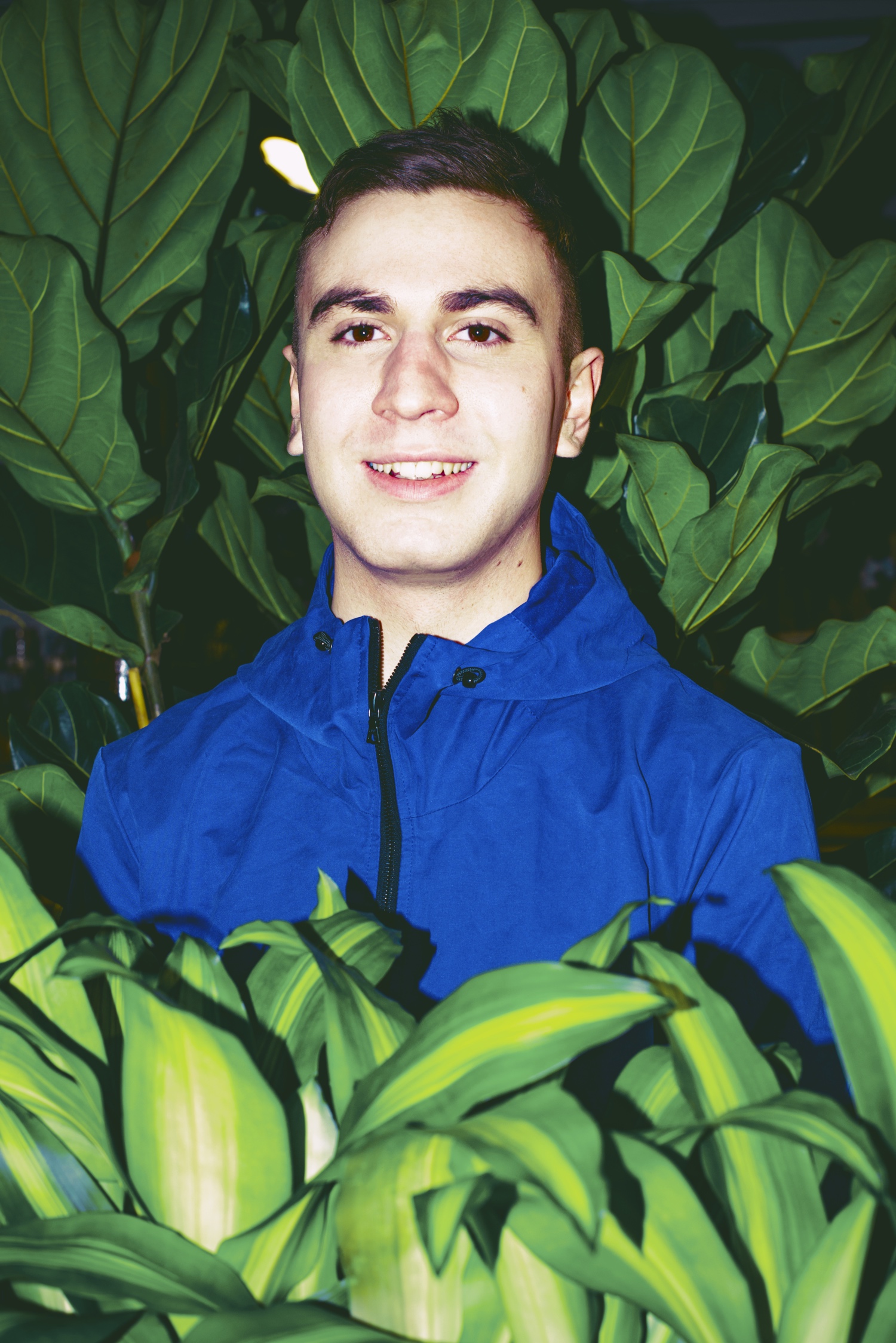 How is it different making music with the Yamaha YM2612 chip instead of just using hardware or computer software?

I have the sound chip and what I do is drag a sound into the sound frame and then it decodes. If I like the bassline on Green Hill Zone, I can put that in there and it gets the instrument for me and I can use that to make my own pattern out of it. It’s a really hands-on process, there’s no preset for bass, leads, etc. I have to manually go into the sound chip and find the instrument that I want and then I can tweak it to my liking.

I think what makes it different is that it has such a unique and memorable sound – it’s nostalgic in a way. Every producer has their signature style, they use a certain sound and I feel that I’ve found mine within the Yamaha YM2612. I feel comfortable using it. I don’t directly sample a game – I just use the instruments within that. All of the instrumentation is my own.

Do you know anyone else who’s making music in this way at the moment?

There are people who use the Yamaha YM2612 to make fan versions of songs, so someone will use a Sega to recreate a Michael Jackson song, but it’ll mainly be for fan purposes. I feel that maybe I’m the only producer within the contemporary music platform that’s using that sound chip. I might be wrong but as far as I know. If there is anyone out there who’s also using it, please get in contact ’cause I’d love to chat to you. There are YouTubers who make Sega remixes but they’re not making content that’s original.

Was that part of what made you want to start doing it, because there was no one else?

Yeah, I saw these people making this music and I was like, I want to use that technique too but I don’t want to use it in a fan way, I want to make my own original content. It felt so natural, seeing as the Sega was so integral to my conditioning as a kid towards music and creativity. It just feels so right! It’s amazing that I’ve found my own signature style at such an early stage. It’s really natural for me to make a song because I know what works for me.

There is one other artist I can think of, the way that he does things reminds me a lot of how you do things as well – Yamaneko.

I was actually thinking about this the other day. I think we have the same way of thinking, I know that he’s inspired by Final Fantasy games – he did a cover version of ‘Balamb Garden’ from Final Fantasy VIII, which is one of my favourite themes from a Final Fantasy game, I love that version. He obviously has that Playstation influence and I have the Sega influence but we’re cut from the same cloth. We have a similar approach in how to use an influence. I loved his stuff when it came out.

What do you have coming next?

There’s a lot of music coming out this year. There are a few more EPs scheduled for the forthcoming months. They’re really special to me.

Is it quite similar to Secret Island or are you switching things up?

I’m still using the Sega, I think I’ll always use that. One of them is an extension and progression of Secret Island and one of them is a dystopian version of the island so it will be darker. It won’t be expected and it’s very Italo disco inspired, that dark ‘80s disco sound.

Secret Island is out now on Lobster Theremin.