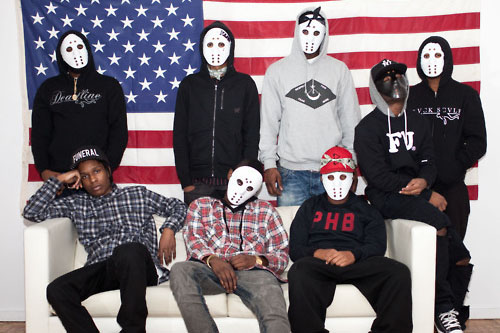 A$AP Rocky’s crew have had a mixtape on the boil for a while.

HipHopDX point towards a new interview with the Harlem rapper, where he lets slip about the upcoming ensemble record. Rocky’s click, it appears, will release their collective project later this month. In Rocky’s words: “We got the A$AP Mob dropping, and that’ll be this month. So look out for that.”

Rocky gets all the limelight, but A$AP Mob are a step above your typical crew of tagalongs and weed-carriers. A$AP Ferg has gained some traction with ‘A Hundred Million Roses’, and has a wonderfully gloopy baritone flow. Ty Beats is the nifty producer behind LIVELOVEA$AP highlight ‘Peso’, and A$AP Twelvy and A$AP Nast both put in good work on Rocky’s ‘Trilla’. Non-musical members include Rocky’s manager A$AP Yams.