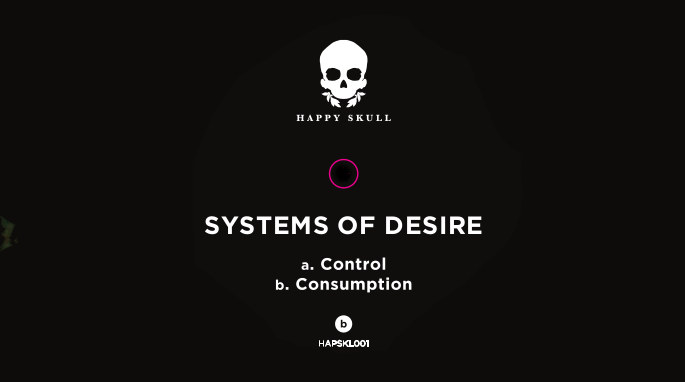 Two of Bristol’s finest producers, Hyetal and Kowton, have teamed up as Systems of Desire.

It’s a partnership that seems to make sense: Hyetal’s music, first displayed on a series of dancefloor 12″s and then on his synth-pop-leaning debut album Broadcast, is full of vibrancy, colour and clear melodies, whereas Kowton has become known for releasing some of the roughest dance cuts around, all overdriven drums, grey delay and grubby bass. Somewhere in the middle, quite possibly, lies nirvana. Or at least a happy medium.

Systems of Desire will debut with ‘Control’ / ‘Consumption’, a single for a new label named Happy Skull, run by Bristol DJs The Kelly Twins. The Kelly Twins have a close link with the city’s Idle Hands record store and seem to appear on a good 30% of line-ups in their town, so it’s nice to see them finally step out with a label. Speaking to Juno Plus this morning about it, Sean Kelly explains that “The process behind the [Systems of Desire] collaboration was different to the usual ‘lets get together and make a bunch of tracks’. Instead they built a rough track together, then went their separate ways producing individual and distinctly different versions of the original jam.

“We are very happy with the results, both tracks are interesting yet playable and perfectly encapsulates what we want to do and what we want Happy Skull to be about.”

It should make shops in early July.