The concert takes place at O2 Academy Brixton in January.

Friends, collaborators and former bandmates of David Bowie will come together for a special birthday tribute to honour the late artist in London next year.

Taking place on what would have been Bowie’s 70th birthday, the Celebrating David Bowie show takes place at London’s O2 Academy Brixton on January 8, just a short distance from where the artist grew up.

The London event is the first in a planned series of global concerts to honour Bowie’s legacy in aid of local charities. There’s no information on what other cities the tribute gig will travel to yet.

Tickets for the concert go on general sale at 9am on November 18 from Ticketweb, with O2 Priority customers getting the chance to buy them on November 16. Full details can be found at Bowie’s official website.

Yesterday (November 13), the designer of the vinyl sleeve for Bowie’s final album, Blackstar, revealed that fans were yet to discover all of its secrets, following the revelation that it reveals the image of a galaxy if held up to light.

“Actually, there’s one big thing which people haven’t discovered yet on the album. Let’s just say, if people find it, they find it, and if they don’t, they don’t. And remember what Bowie said about not explaining everything,” designer Jonathan Barnbrook told Mary Anne Hobbs on BBC 6 Music.

“There are a lot of other things going on that aren’t at the surface. I do hope people see them. Not necessarily straight away.” 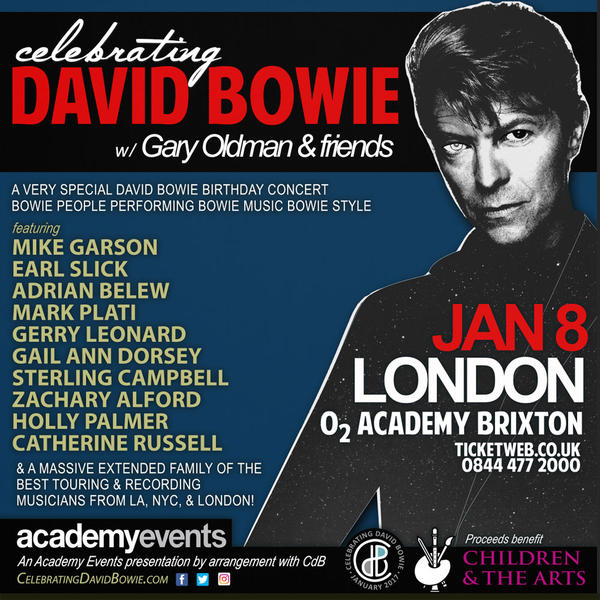