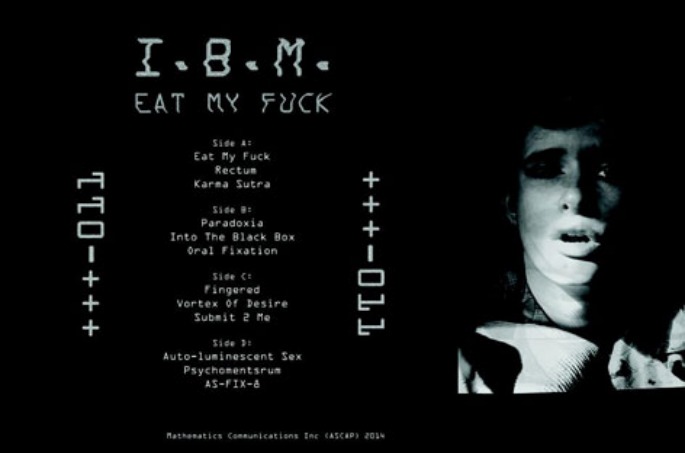 The Chicago producer and DJ best known as Hieroglyphic Being has announced a new album under his alias IBM (Insane Black Man) simply titled Eat My Fuck.

The double-vinyl LP is set for release in May via +++, an offshoot of his own label Mathematics, and comprises a batch of filthy-sounding tracks that would be right at home on FACT’s rundown of the greatest titles in the history of dance music – ‘Autoluminescent Sex’, ‘Fingered’, ‘Rectum’, and so on.

The track samples from Juno’s online store have a similarly unhygienic whiff to them, in line with the screwed-up, lo-fi house and techno that Moss has made his calling card over the years.

In the meantime Moss has been named as one of several remixers contributing to a new compilation of All Saints Records artists, delivering his own take on Roedelius’ ‘Remember’.

The prolific artist’s recent releases include A Synthetic Love Life (a compilation of tracks produced between 1996 and 2013), The Electronic Belt (an EP comprising tracks previously released on CDR) and Seer Of Cosmic Visions (a six-track set of “original jams and reworkings of previously released tracks”). Don’t miss his FACT mix, too. [via RA]